Radisson Blu Hotel near Disneyland Paris: 4 things you need to know before you go! 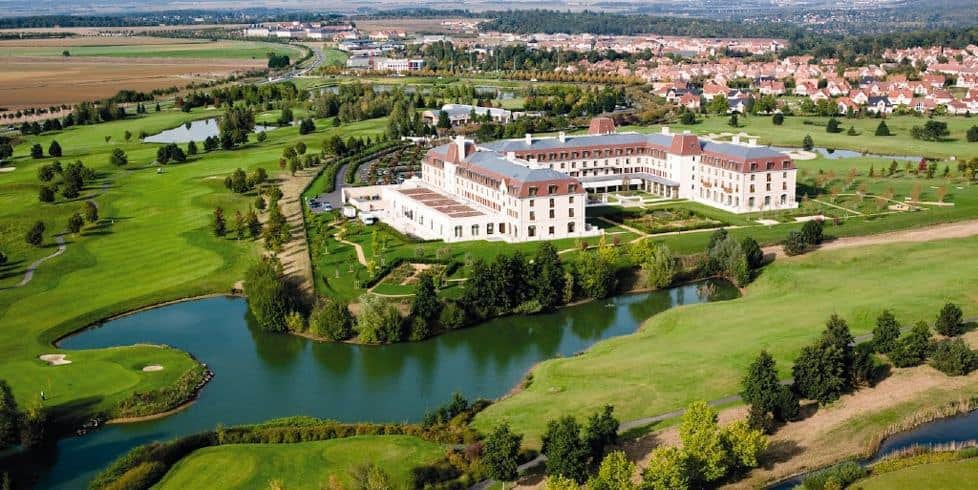 In short, Disney Hotels are the accommodations owned by Disney. These are – except for the Davy Crockett Ranch – within walking distance of the Disney Parks. Each has its own theme and a touch of magic, not too childish, but you will see the Disney characters on the wallpaper, in the curtains, and in the hotel itself. You can even meet some of them in the main areas.

The advantage of Disney Hotels is definitely the location, disadvantage the value for money. Because you know, if something says Disney, it’s usually expensive.

An alternative for Disney Hotels are called Partner Hotels. These hotels are located in the area surrounding Disneyland Paris, but not on the property. It’s possible to walk to the parks from some of them, but for most, you’ll need the shuttle bus. Usually, this bus is free of charge.

Radisson Blu Disneyland Paris, one of the Partner Hotels

The Radisson Blu is located a bit outside the Disney Resort, near the golf course. It’s a popular destination for mainly adults. The rooms are not very magical and the hotel itself is not really aimed at families, especially compared to the other Partner Hotels like Dream Castle, Magic Circus, or the Explorers Hotel.

Keep this in mind when booking. If you are going with small children, this might not be the preferred hotel for you.

As one of the Partner Hotels, it does offer free transportation to the Disney Resort. There is a bus service that will take you to the parks in about 10 to 15 minutes. And the bus will also pick you up at the end of the day.

This is also the bus you will need when arriving from the airport or going by train.

The Radisson Blu near Disneyland Paris has a lot of amenities. Rooms are spacious and everything you need will be available in there. It’s a 4-star resort, so you can have some high expectations, right? The rooms have air conditioning which is great. The summers can get very warm in this part of France, so it’s nice if you can cool off in your room.

Other items you have in your room are:

The Radisson Blu at Disneyland Paris has 3 room types: standard, premium, and junior suite. The standard and premium rooms are very similar. The only difference is that you have a view of the golf course in the premium, a Nespresso machine in the room, and you can borrow a bathrobe and slippers. It will be a bit more expensive per night though compared to the regular rooms.

The junior suite has a bedroom and a separate living room with a sofa and TV. This makes your stay more pleasant if you stay longer.

Each room can accommodate up to 4 people.

What you probably didn’t know is that you can get to the French capital from the Radisson Blu in less than an hour. First, you take the shuttle bus to the station of Disneyland Paris. From here you will then take the train that will take you to Paris in 35 minutes. So you can easily combine a visit to Mickey and his friends with a cultural trip to museums and other attractions.

Cheaper than a comparable Disney Hotel, but pay attention when you book!

There are a few ways you can book the Radisson Blu hotel at Disneyland Paris. The first is on the Radisson Blu’s website where rates start at about €100 per room per night.

The rooms in this hotel can also be booked through booking websites. The prices seem to differ, so it always pays to compare. Do watch out for booking sites you are not familiar with that charge very low rates.

A while back I saw for another Partner Hotel – the Magic Circus – a room on a booking site unknown to me that was €40 cheaper than on other sites. That already sounded almost too good to be true, and it was. After contacting the hotel, it turned out that they did not have an agreement with this party, so it was not possible to book that cheap room. I’m glad I asked!

If you book through the Radisson Blu Hotel or a well-known booking site, you should also be aware that tickets are not included in the price. You have to order these tickets separately through the website of Disneyland Paris or buy them at the front desk. An entrance ticket costs between €50 and €80 per person / per day, depending on the season. The ticket is for 1 park. If you want to visit both parks, then €20 per person is added.

Would you rather not hassle with separate tickets then you can also book a package through Disneyland Paris. You then combine your hotel stay with the Disney entrance tickets and get a small discount on the total price. Note that you are still often more expensive than if you would buy single tickets. Even then it really pays to compare prices.

Captain Jack’s at Disneyland Paris, is it worth the price?

Booking a table in a Disneyland Paris restaurant:...

Captain Jack’s at Disneyland Paris, is it worth...

Dream Castle Hotel at Disneyland Paris, this is...

What are the best restaurants at Disneyland Park?

What you need to know about Campanile Val...

What you must know about B&B Hotel Disneyland...

6 things you need to know about CenterParcs...